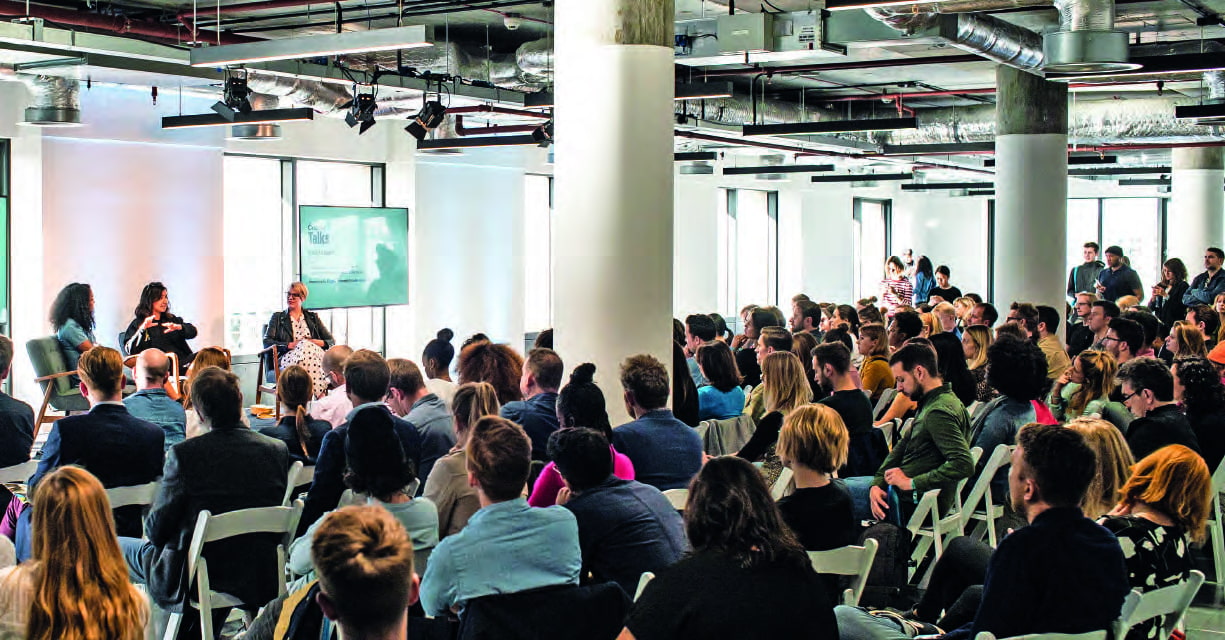 The ﬁrst Courier Live event at Republic brought together 1500 people from the world of modern business on a sunny day in late September. Set on one of the newly refurbished office floors at Republic; across four stages of talks, panel discussions and workshops, topics covered everything from food to fashion to ﬁntech. Here, Clipper looks back at some of the highlights. 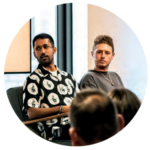 Building an Empire from Your Bedroom

‘We ran a Highsnobiety survey in 2017 and found that 90% of our audience bought or sold something on a resale site in the previous 12 months,’ says Brock. ‘45 to 50% spent up to $500 or more on a single purchase. 50% said their most expensive purchase in the last 12 months was a pair of sneakers. It shows that within this demographic (ages 18 to 35), people have no hesitation in spending huge amounts on a product.’

The demand for many trainers outweighs supply — and brands play into the hype. ‘Products are raﬄed now,’ says Mubi. ‘We had 135,000 signups for Nike’s Air Max 1/97 Sean Wotherspoon trainers. We couldn’t even provide 0.8% of that. When you have that many people trying to get something that you can’t give them, you’re going to need a lottery system.’

‘You can buy a pair of Balenciaga shoes for $800, sell them for $1000 or $1200 and keep reinvesting that money,’ says Brock. ‘It’s an entrepreneurial spirit. Kids think of the product as currency rather than a dollar value. They know if they buy a shirt from Supreme for $50 they can sell it for $200 but equally they can trade it for another product that’s worth $200.’

Insights from a seller.

‘I ﬁrst got a Depop account at university to sell clothes as a way of aﬀording meals,’ said Daniel, who is about to open a brick-and-mortar shop in the UK city of Nottingham. One lesson learned: People want a sales mix ranging from super-hyped products to under-retailed ones.

‘They want to see Sean Wotherspoons, Yeezys and Oﬀ-Whites, but 9 times out of 10 they can’t aﬀord them and they’ll end up buying a cheaper trainer. I learned the transactional price points and trialed diﬀerent things. That’s why I was so successful.’

Reselling as a career?

‘More and more people have left their jobs to make a living out of Depop,’ says the company’s CEO Maria Raga. ‘Some of our top sellers make an income of 6 digits. We help our top sellers become proper businesses by organising workshops to assist with their VAT and bring them together to learn from one another.’ 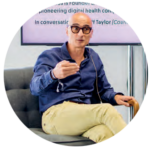 The Future of Healthcare

‘Healthcare is broken. People don’t appreciate how broken it is,’ Dr. Parsa says. ‘Out of a global economy of $70 trillion, $10 trillion is spent on healthcare and yet 50% of humanity has zero access. Not a little, but zero.’ For those with access, it’s mostly inadequate: ‘You have a high likelihood of getting misdiagnosed and the average consultation is less than 2 minutes.’ In addition, 70% of healthcare spending goes to salaries and two-thirds of that money goes to treating preventable diseases — an area Babylon is aiming to disrupt.

‘We started less than 5 years ago,’ Dr. Parsa says. ‘Artiﬁcial intelligence was a promise for the last 50 years, but it only started truly delivering in the last 2 to 3 years. All of a sudden it came together in the right way. Like everything else in life, you get lucky and then you pretend you were smart!’

Technology and human knowledge are growing at a rapid clip, with far-reaching implications for society. Quantum computing and 5G will change everything. ‘50-fold more processing power will soon become available to us,’ Dr Parsa says. The arrival of 5G will also be a game-changer. ‘5G is 100 times faster than 4G. We’ll be able to download a hi-deﬁnition movie in one second on a mobile phone. Think about the power that will give us.’

Focus on what we don’t know. ‘We’re going to double humanity’s knowledge every 2 to 3 years. What we know today is only 30% of what we’ll know in 4 years and 10% of what we’ll know in 10 years. This means 90% of the world’s knowledge will be discovered in the next 10 years. Big corporations are failing because their energy is focused on the 10% rather than where the next 90% will come from. Focus on that 90% and you’ll do phenomenally well.’

It’s not a popularity contest

The moment you try to persuade everybody, you’ve lost. ‘You only need to persuade 2-3% percent of them — early adopters,’ Dr. Parsa says. ‘Far too much energy gets wasted on wondering if people believe in you. Being an entrepreneur is instead a matter of believing in yourself. I couldn’t care less whether a particular doctor or critic agrees or disagrees with what I’m doing. The fact remains: the old model of healthcare is unsustainable, it’s not deliverable and it’s left most of the world’s population behind. 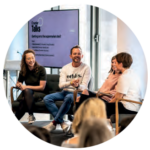 Need to convince a buyer to take a punt on a new brand? Courier columnist and food entrepreneur Fleur Emery hosted a panel featuring Pip Murray from nut butter brand Pip and Nut, Young Foodies’ Thea Alexander and Jason Gibb of the Bread and Jam festival. Some key takeaways:

To win a supermarket contract, do the buyer’s thinking for them, said Fleur. ‘[Buyers] are under a lot of pressure and every part
of their category has to be making money. You’re asking them to take something oﬀ the shelf that’s already making money and put something completely unknown in its place.’ Familiarising yourself with the category across all supermarkets and understanding how your own brand sits within it is key.

Be open to feedback.

Consider developing your branding in iterations, rather than investing heavily in it early on, said Jason. ‘What you really need to do is make [the branding] good enough to get to the next stage, and be very open to feedback from the retailers, hear what they have to say.’ Thea also cautioned against spending too much on branding design because ‘six months later, you will change it. Packaging evolves.’

Pip says it’s best to prove your concept with small retailers before going after big ones. ‘If you’re completely unknown, you have to prove you can do it on a small scale before going to Sainsbury’s. You’ve got to show you can deliver on time and that your product sells. Sell the brand in smaller independent stores to build a robust enough case for a buyer to take a risk.’

Take a look at some video footage of the day