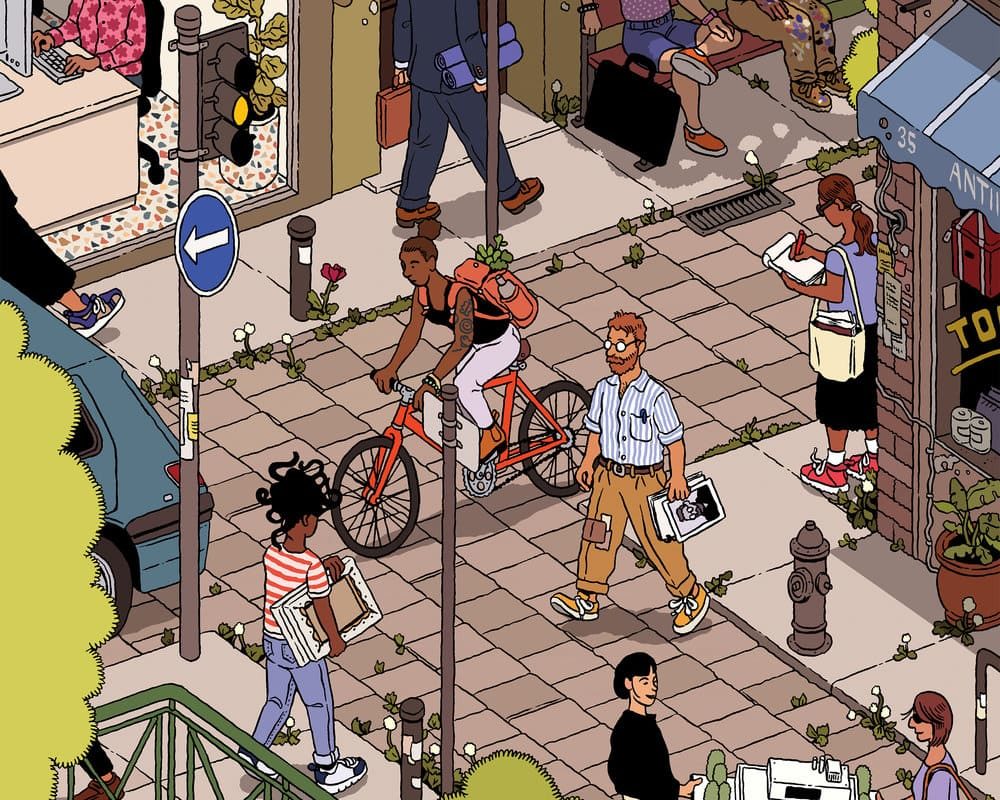 What even is “creative talent” in today’s world? Those who find themselves employed in the creative industries? Or does it range from struggling artists to technology or industrial designers with a net worth in the multimillions? (Some even whack into the mix the entirety of the ‘knowledge-based economy’ – which would include lawyers.)

At both ends of the spectrum, it’s a category of people very important to the health and success of cities, bringing them cultural capital and also just regular capital. So, it’s no wonder that many have attempted to distill what exactly attracts these people to one place or another. Various people have, inevitably, authored various theories on what draws in this type of person. Speaking of cities as a whole, US urban theorist Richard Florida describes three essential elements: talent, tolerance and technology.

We also “know” that a smorgasbord of great cafés, restaurants and bars can do the trick. Yet, in the end, we often get gentrification and corporatisation: the local butcher is forced out by rising rents, and a new “organic free range” butcher moves in. A neighbourhood like this can change so quickly it becomes untethered from its past, losing its sense of authenticity and becoming subjected to what Brooklyn-based sociologist Sharon Zukin called an “overbearing sameness.” Not a great look.

Of course, change is the name of the game. One business – even a generations-old family business – being replaced by another can be a sign of good health, and existing businesses can benefit from some fresh faces. Cities must continue to develop and evolve, otherwise, we’d end up a world of Genevas: stale and boring. A good and vibrant city has a dose of new and many timeless favourites. We need this mix: a sense of discovery paired with reassuring consistency. This is perhaps what’s particularly seductive for creative people, both past and present, who have often worked in solitude in studios or athome. For them the new can offer a new stimulus, the old can sustain a sense of community.

What has been the great challenge of city-building is to attempt building creative communities from scratch.

It’s not an easy task, and requires building genuine relationships with creative people, not just those corporations who feed off them.

An emotional investment and sense of ownership must be shared between a neighborhood’s leadership or developer and those who they hope to occupy it.

One can’t begin with too complete an idea of what is to come. Most crucially, this is because creativity needs emptiness. A neighbourhood that seeks to foster creativity – meaning to be a platform for imagination and original ideas – must offer emptiness to people.

First, they need the emptiness of time. And that relates to economics: time is money, and there must be the economic ability to dedicate time to experiment and to failure. There must the opportunity to create things that might not have a market value (at least when they are starting out). Playwrights and actors, novelists, artists and illustrators, drag queens and cabaret performers; they have been a foundation of cultural production for millennia and yet few among them make very good money. Meaning: high rents and Waitrose can be a damp blanket.

Second, creative neighbourhoods need an emptiness of space. By this, I mean: unprogrammed space. Not pop-up markets, but rehearsal spaces. Not member’s clubs, but workshops. We so often confuse entrepreneurs and culture-lovers with creatives.

The disturbing reality is that today we think of creativity as necessary not because of its cultural production, but because of its
economic production. The creative industries we seem to care about most are increasingly becoming, as a result, those with the highest annual turnover, whose employees by extension have immense disposable income.

Look at London’s Shoreditch or New York’s Williamsburg, the Mission district in San Francisco, and Kreuzberg in Berlin – None became what they are today thanks to a direct policy to make them so: they had no “hubs” or “incubators”; they were dirty and in some
places derelict.

Not a cycle path in sight, not a whiff of a flat white. What made them what they are today is that they were cheap, and that they “happened”. People were able to carve out a bit of emptiness for themselves. When we build new parts of cities, the question is not what can we find to fill it, but how can we allow emptiness?