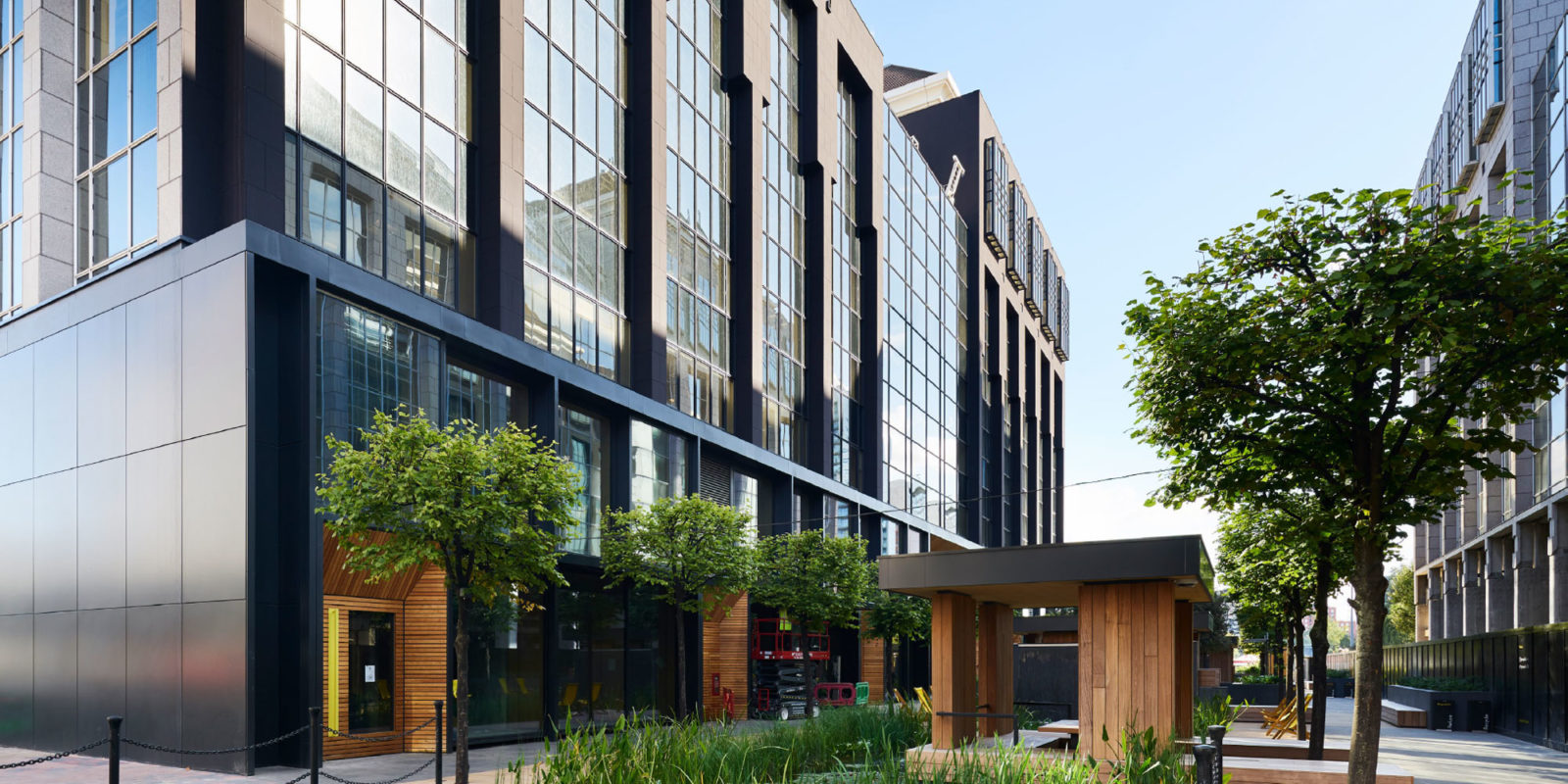 STEPPING OUT OF East India DLR station has never looked so different. From the arched walkway, a white, yellow and blue building peeks into view. Get closer, and the docklands’ water, birds and plant life become visible. A few street food vendors are plotted around, waiting for workers to get their lunches.

Disrupting this tranquil scene, cranes and construction vehicles jostle around, bringing home the extent of the transformation this part of London is going through. This is Republic’s Import and Export buildings. When complete, the scheme will provide 650,000 square feet of office space, alongside new bars, restaurants, shops and a gym. Juxtaposed against this, there’ll be open green spaces and balconies with spectacular views over the Greenwich peninsula.

For Richard Hywel Evans, director of Studio RHE, the architecture firm leading this project, Republic represents a flourishing community. “It should be a joyous place to work, with a vibrancy that extends outside of traditional working hours,” he says. “As you get off the DLR, you’re looking at this really fun, energetic and vibrant space, which is a lovely place to be and a lovely place to go and work.”

Evans says his practice “worked from the inside outwards” when conceptualising Republic. Starting with the Import Building, which houses The Trampery co-working space and high-quality furniture by Kontor, Evans says his practice has given a nod to the heritage of the site using an “industrial palette” of materials. 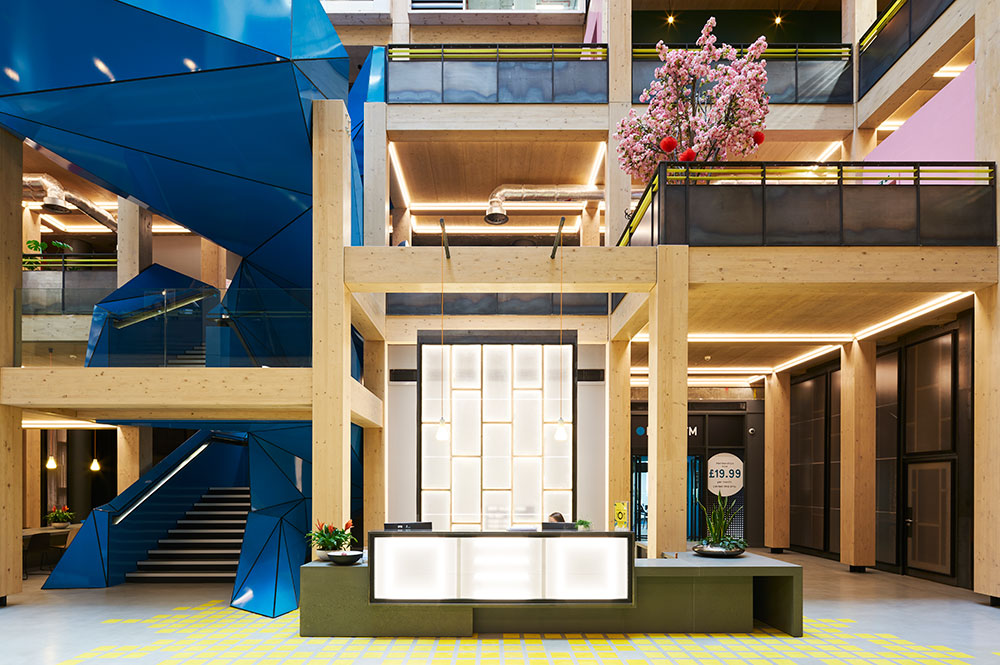 The building’s most striking features include the bold painted façade by artist Scott King, and an angular, almost spiky-looking, blue steel staircase that snakes its way up the building. This milled steel, says Evans, provides a “direct contrast” to the wooden atrium, which runs through the heart of the building, offering views right up to the top. It also provides a window into each of the companies based at Republic, revealing the mix of identities on different floors.

Studio RHE has created a vibrant setting – with an ambient colour scheme, lighting and plants – but Evans is keen to stress that each unit is a blank canvas to play with. Tenants can adapt the building to suit their own needs. “The idea of the space is that it will become more visually elaborate over time as it becomes occupied,” he says. “People can express themselves using different colourations of light and different artwork.”

The outside environment is also “an extension of the workspace”, says Evans. The landscape is punctuated with steel pavilions, luscious green spaces, and water features – the hope is that residents will use the space for meetings as well as a place to relax. There will not be a cement mixer in sight.

The artist behind the painted façade on the Import Building

What was the creative thinking here?

The idea was to make a design that alluded to the concept of an ‘idealised community’. The design is based on [British theorist] Stafford Beer’s ‘Project Cybersyn’: an organisational model that he developed in the early 1970s.

How did the concept develop?

Andrew Hale [a brand and marketing strategist at Republic] and I decided very quickly that the design must have substance. It needed to be something more than just a pattern. At the same time, we were determined that the design must translate into being a beautiful façade. We wanted to make a landmark building.

In what ways does the Import building’s external look connect to the wider Republic development?

By basing the design on Project Cybersyn, we wanted to – subliminally at least –suggest that Republic is its own independent state. I got very into this idea that Republic could become a world of its own – situated between the ‘high commerce’ of Canary Wharf and the ‘high cool’ of Shoreditch. 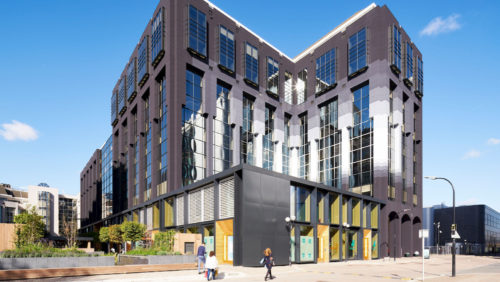 Charles Armstrong, founder and CEO of The Trampery, on how their East India space came together.

What makes this a unique co-working space?

Part of the opportunity at Republic was about bringing together really large and established businesses on the upper floors, with the entrepreneurial businesses in The Trampery workspace. This is really the philosophy of Republic as a whole.

How have you created an effective workspace at Republic?

We’ve created an environment that supports the human needs of entrepreneurs. Colour, light and texture are vital ingredients for that. We’ve chosen a mid-century stylistic approach and used a lot of pastel colours. Plants are a very important part of the interior. They help bring life and calmness into a space.
The design of the floor plan is specifically intended to create ‘collision points’; opportunities for forming new friendships and building a stronger community. 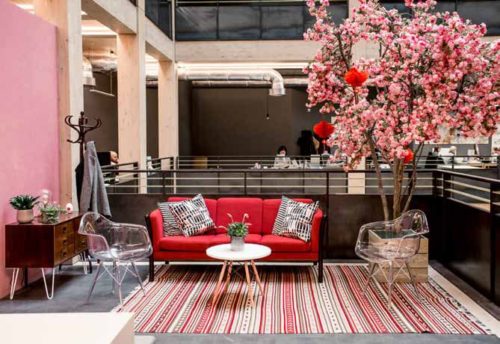 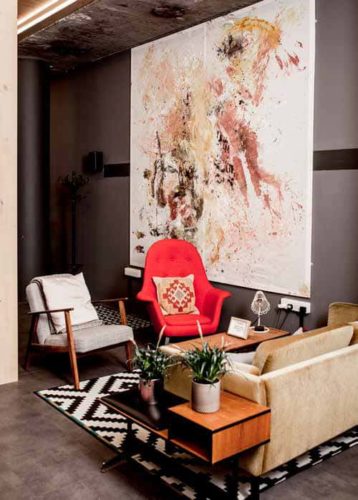